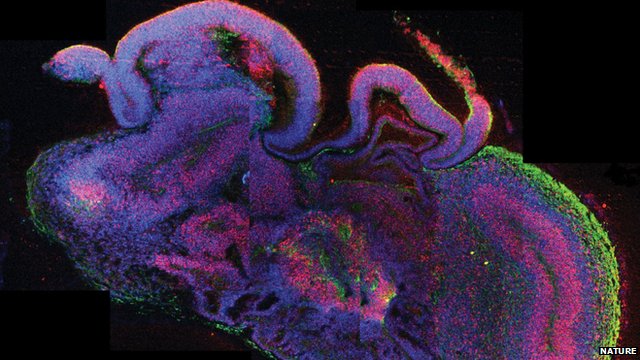 Whoah, fascinating article from the BBC.

Miniature “human brains” have been grown in a lab in a feat scientists hope will transform the understanding of neurological disorders.

The pea-sized structures reached the same level of development as in a nine-week-old foetus, but are incapable of thought.

The study, published in the journal Nature, has already been used to gain insight into rare diseases.

Neuroscientists have described the findings as astounding and fascinating.

The human brain is one of the most complicated structures in the universe.

Scientists at Institute of Molecular Biotechnology of the Austrian Academy of Sciences have now reproduced some of the earliest stages of the organ’s development in the laboratory.

They used either embryonic stem cells or adult skin cells to produce the part of an embryo that develops into the brain and spinal cord – the neuroectoderm.

This was placed in tiny droplets of gel to give a scaffold for the tissue to grow and was placed into a spinning bioreactor, a nutrient bath that supplies nutrients and oxygen.

A cerebral organoid – the brown pigments are a developing retina

The cells were able to grow and organise themselves into separate regions of the brain, such as the cerebral cortex, the retina, and, rarely, an early hippocampus, which would be heavily involved in memory in a fully developed adult brain.

The researchers are confident that this closely, but far from perfectly, matches brain development in a foetus until the nine week stage.

The tissues reached their maximum size, about 4mm (0.1in), after two months.

The “mini-brains” have survived for nearly a year, but did not grow any larger. There is no blood supply, just brain tissue, so nutrients and oxygen cannot penetrate into the middle of the brain-like structure.

One of the researchers, Dr Juergen Knoblich, said: “What our organoids are good for is to model development of the brain and to study anything that causes a defect in development.

“Ultimately we would like to move towards more common disorders like schizophrenia or autism. They typically manifest themselves only in adults, but it has been shown that the underlying defects occur during the development of the brain.”

The technique could also be used to replace mice and rats in drug research as new treatments could be tested on actual brain tissue.

Researchers have been able to produce brain cells in the laboratory before, but this is the closest any group has come to building a human brain.

The breakthrough has excited the field.

Prof Paul Matthews, from Imperial College London, told the BBC: “I think it’s just mindboggling. The idea that we can take a cell from a skin and turn it into, even though it’s only the size of a pea, is starting to look like a brain and starting to show some of the behaviours of a tiny brain, I think is just extraordinary.

“Now it’s not thinking, it’s not communicating between the areas in the way our brains do, but it gives us a real start and this is going to be the kind of tool that helps us understand many of the major developmental brain disorders.”

The team has already used the breakthrough to investigate a disease called microcephaly. People with the disease develop much smaller brains.

A much smaller brain develops with microcephaly

By creating a “mini-brain” from skin cells of a patient with this condition, the team were able to study how development changed.

They showed that the cells were too keen to become neurons by specialising too early. It meant the cells in the early brain did not bulk up to a high enough number before specialising, which affected the final size of even the pea-sized “mini-brains”.

The team in Vienna do not believe there are any ethical issues at this stage, but Dr Knoblich said he did not want to see much larger brains being developed as that would be “undesirable”.

Dr Zameel Cader, a consultant neurologist at the John Radcliffe Hospital in Oxford, said he did not see ethical issues arising from the research so far.

He told the BBC: “It’s a long way from conscience or awareness or responding to the outside world. There’s always the spectre of what the future might hold, but this is primitive territory.”

Dr Martin Coath, from the cognition institute at Plymouth University, said: “Any technique that gives us ‘something like a brain’ that we can modify, work on, and watch as it develops, just has to be exciting.

“If the authors are right – that their ‘brain in a bottle’ develops in ways that mimic human brain development – then the potential for studying developmental diseases is clear. But the applicability to other types of disease is not so clear – but it has potential.

“Testing drugs is, also, much more problematic. Most drugs that affect the brain act on things like mood, perception, control of your body, pain, and a whole bunch of other things. This brain-like-tissue has no trouble with any of these things yet.”