Gender, abortion, politics – it’s all going off in Texas!

The moment was years in the making. It was 11.45pm Tuesday night, and the Texas Senate was poised to enact perhaps the most restrictive anti-abortion bill in the United States. State senator Wendy Davis had filibustered the bill for 11 hours in a remarkable attempt to run out a 30-day special legislative session.

Hundreds of thousands of people across the country began to follow Davis’s dramatic filibuster on an internet livestream. They sawRepublicans use procedural technicalities to cut her off, and with just 15 minutes left before a midnight deadline, Democrats finally seemed out of maneuvers.

Then state senator Leticia Van de Putte, a Democrat from San Antonio who had rushed back to the Texas Capitol from her father’s funeral, asked to be recognized to speak. The Republican presiding officer at first ignored her. When she was finally given the floor for an inquiry, Van de Putte asked: “At what point must a female senator raise her hand or her voice to be recognized over the male colleagues in the room?”

The orange-clad abortion-rights supporters packed in the gallery burst into cheers. Their shouts grew louder and louder until they drowned out the final minutes of the session, preventing Republicans from passing the bill. No one in the Texas legislature had ever seen anything like it.

The day’s dramatic events that captivated people across the country – the 11-hour filibuster, the dramatic fight over arcane Senate rules, and the decisive 15 minutes of ear-splitting whooping and hollering from the gallery – were the result of political tensions building in Texas for years.

There’s a saying: “Texas is paradise for men and dogs, but hell for women and horses.” That’s a little outdated and not completely accurate: in fact, horses are treated pretty well here. Women in Texas have had a difficult time.

For two decades, since Ann Richards was governor, Texas politics has been dominated by a small group of mostly Anglo-Republican men, elected by a few hundred thousand GOP primary voters.

In 2011, the legislature, fueled by an influx of Tea Party Republicans, slashed the state’s family-planning budget by two-thirds, which forced more than 60 clinics to close around the state and deprived more than 140,000 women of access to low-cost contraception and health screenings.

That same year, the legislature also required any woman seeking an abortion to undergo a pre-abortion sonogram and to hear a wrenching description of the fetus. The anger and frustration over Texas Republican leaders’ attacks on women’s health continued building in 2013.

In June, Governor Rick Perry added abortion to the list of subjects the legislature could debate in the 30-day special session. A number of anti-abortion proposals defeated during the legislature’s regular session that ended in May were revived and combined into one measure. The omnibus bill would ban abortions after 20 weeks gestation, force clinics to meet standards of surgical centers (rules that could close 37 of the state’s 42 abortion clinics) and require abortion doctors to have admitting privileges at a hospital within 30 miles, a problem for anyone in rural Texas.

Critics say these proposals could severely curtail access to abortion, especially for poor and rural women. Some Texans became fed up.

When a Texas House committee heard the bill on June 20, more than 700 people signed up to testify against the measure. Many didn’t get the chance. After an all-night hearing, the Republican committee chair cut off public testimony.

When the bill came up for a floor vote in the Texas House, orange-wearing abortion-rights supporters filled the gallery. They got to hear the bill’s Republican sponsor, Jodie Laubenberg, reject an amendment to exempt victims of rape and incest from the new restrictions. She justified her stance by saying rape victims had other options for preventing pregnancy, including in hospital emergency rooms where they have “rape kits that will help the woman, basically clean her out.”

So when Wendy Davis strode into the Senate chamber on Tuesday with her pink sneakers and perfect Texas hair, and began her one-woman stand against the bill, she was channeling the anger, frustration and hopes of millions of Texans who had had enough. As word spread of Davis’ filibuster, thousands of supporters from all over Texas descended on the Capitol.

Of course, every good drama needs a villain. If Davis was the hero for the thousands who flooded the Capitol, the foil was Republican lieutenant governor David Dewhurst. 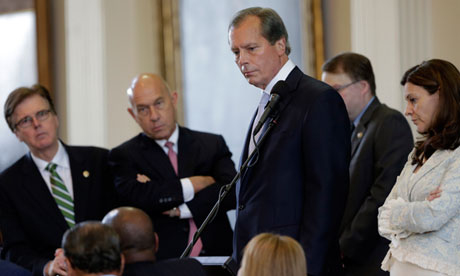 A stodgy, awkward man with a remarkable lack of charisma for a Texas politician, Dewhurst has served as lieutenant governor for more than 10 years and has long harbored ambitions for higher office. In 2012, he lost a US Senate race to Ted Cruz largely because he was seen as insufficiently conservative.

Ever since that stinging loss, Dewhurst has been trying to endear himself to social conservatives so he can win re-election. His efforts to thwart Davis’ filibuster and force the bill through were part of that campaign.

It might have been smarter, and easier, for Dewhurst to simply allow Davis to filibuster and concede temporary defeat. After all, Governor Perry can – and later did – call another special session. In fact, Perry can call as many sessions as he desires. Instead, Dewhurst and Senate Republicans went against tradition and tried to halt the filibuster.

If the ploy had worked, Texas conservatives might have seen Dewhurst as the hero who saved the anti-abortion bill. But the plan backfired, and he appeared weak and ineffective. Dewhurst already had two Republican challengers in his run for re-election, and a third announced his candidacy after the filibuster debacle.

While Dewhurst’s political career looks endangered, Davis’s is just taking off. She’s become a national star literally overnight, and a run for governor is widely expected.

The man who holds that job now hasn’t yet announced his future plans, and he remained oddly silent during the week’s drama. On Thursday, though, Perry signaled that he’s ready for a fight on abortion, telling the National Right to Life Convention in a Fort Worth suburb that the citizens’ filibuster was a “hijacking of democracy.”

He added that Davis, a single teen mother who worked her way to Harvard Law School, “hasn’t learned from her own example that every life must be given a chance.”

Davis responded that the remarks were “small words that reflect a dark and negative point of view.” The next special session is going to be spectacle.

If Davis does run for higher office, she will face difficult odds. The Republican Party and the conservative grassroots enjoy strong institutions, a deep bench of politicians and activists, and a significant financial edge.

But the events this week showed what astute observers already knew: Texas isn’t as deeply red as many people think. Beneath the Republican dominance is a diverse, urban state with a openly lesbian mayor in its largest city (Houston).

The abortion bill will likely eventually pass. With large Republican majorities in both chambers of the legislature, Democrats have few options for defeating the bill.

Another filibuster is unlikely; the GOP won’t make the mistake of waiting till the session’s last day for a vote. The next special session will be a political circus unlike the state has ever seen – with emotional debates and thousands of protestors packing the Capitol. And the national media will no doubt descend on Austin. But in the end, Republicans have the numbers to pass the bill.

The larger question is whether Democrats and progressives can capitalize on this moment. For Davis’s filibuster to have lasting impact, Democrats will have to harness the energy and activism into a movement that would make them once again competitive in America’s second-largest state.

Davis’s filibuster was an act of defiance that no one who saw it will soon forget. Now comes the hard part.