Are fundamentalist schools up to standard? 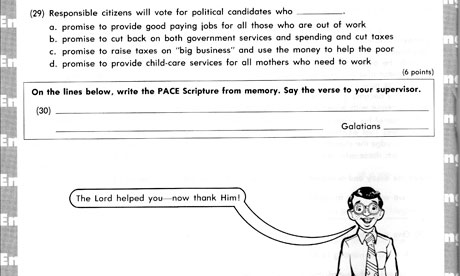 An Ace English test question. The ‘correct’ answer is b.

The Accelerated Christian Education (Ace) group of fundamentalist schools has gone largely unnoticed by academic researchers and the mainstream media. Recent changes to legislation could mean the education they provide does not meet new standards.

Ace schools are unlike any others. Students work at desks facing the wall, with partitions separating them from their neighbours. They complete a series of workbooks (Paces); interaction with others is forbidden during this time.

God will bless obedience and humility.

I shall obey Thy statutes and judgments.

After completing these exercises, students proceed to mark their own work from answer keys. This is possible because in Ace, questions have one correct answer.

Last year, the government’s Independent School Standards were amended. The standard applied to political questions is now met if “political issues are brought to the attention of pupils [and] they are offered a balanced presentation of opposing views”.

A school cannot do this and use the Ace curriculum. Biased political statements are not only part of Paces, they are also built into assessments that are integral to the curriculum.

In an English test, students face the following multiple-choice question:

(29) Responsible citizens will vote for political candidates who

a. promise to provide good paying jobs for all those who are out of work

b. promise to cut back on both government services and spending and cut taxes

c. promise to raise taxes on “big business” and use the money to help the poor

d. promise to provide child-care services for all mothers who need to work

Ace’s political views find their way into science, too, with a biology unit stating the objective: “When you have successfully completed this Pace, you should be able … to tell why abortion is wrong”. In history, students learn:

“Since its inception in 1948, the modern state of Israel has had to defend itself against its Arab neighbours many times. Over and over again, some Arab leader would raise the cry of ‘holy war’ to drive the Jews into the sea; however, the hand of God is on his chosen people even to this day.
“The fantastic victory of Israel in the Six-Day War proved [its critics] wrong. Can we doubt that God had His hand in the outcome of this war?”

In economics, Keynesian ideas are wrong while Adam Smith’s are right. In geography, the prosperity of nations is clearly linked to the amount of Christian influence (“God blessed the United States, and it became the strongest and most prosperous nation on Earth”). In US history, it is taught that Jesus commanded us to make a profit; giving “handouts to citizens” was contrary to the intentions of America’s hallowed founding fathers; nontaxpayers should not vote; and it is wrong for governments to provide welfare for citizens. “Liberals” receive particular criticism.

The new regulations for independent schools came into force at the start of 2013. Since then, only one Ace school, Paragon Christian Academy, has had an Ofsted report published. No comment was made on its politics provision.

A near-impossible task faces an Ofsted inspector visiting an Ace school. There are hundreds of Paces – 144 in each core subject, plus a labyrinth of electives. Without knowing where to look, an inspector could miss controversial content. Although all Paces contain claims that those in mainstream education might find alarming, most of it meets the relevant standards.

This cannot be addressed by an Ofsted inspection. The Ace curriculum is rigidly standardised and has operated largely unchanged for decades. If the Ace curriculum does not meet the required standards, ensuring that would amount to demanding that much of it is rewritten. It may be that the options are either to change the standards, or to close the schools.