As the BBC reports:

Two pro-gun US senators have called for changes to firearm laws, as the first victims of the Newtown school shootings were buried in Connecticut.

Democrats Mark Warner and Joe Manchin, who have “A” ratings from the National Rifle Association (NRA), now say action is needed after the massacre.

Noah Pozner and Jack Pinto, both aged six, were buried on Monday after funeral services attended by hundreds.

They were among 20 children and six adults killed at Sandy Hook school.

Other victims’ funerals will be held throughout the week, and the town has already begun removing Christmas decorations in mourning.

Two adults who were injured in the attack survived are recovering in hospital and would be crucial witnesses as police continue their investigation, it was confirmed on Monday.

Lt Paul Vance said they were recovering and would be interviewed at an appropriate time.

Children who witnessed the attack would also be interviewed – in the presence of parents and professionals – Lt Vance added.

The Sandy Hook gunman was named as Adam Lanza, who took his own life at the end of a killing spree that began with him shooting dead his own mother.

Despite a long history of pro-gun views, West Virginia Senator Joe Manchin told US network MSNBC on Monday that it was time to “move beyond rhetoric” on gun control.

Mr Manchin, a gun owner and frequent hunter, said: “I don’t know anyone in the sporting or hunting arena that goes out with an assault rifle.”

“It’s common sense. It’s time to move beyond rhetoric. We need to sit down and have a common sense discussion and move in a reasonable way.”

Virginia Senator Mark Warner, another Democrat who has backed gun owner’s rights, told reporters outside the Virginia capitol that the “status quo isn’t acceptable”. He later called for “rational gun control” in an interview with a local news broadcaster.

Mr Warner said he had been approached repeatedly over the weekend as people began to seek answers and solutions.

On Sunday President Barack Obama told residents at a vigil in Newtown the US must do more to protect its children.

“We can’t tolerate this any more,” Mr Obama said. “These tragedies must end and to end them we must change.”

On Monday, White House spokesman Jay Carney said tighter gun control laws are part of the answer to violence in the US, but stressed that the president did not have a specific policy to announce.

“It’s a complex problem that will require a complex solution,” Mr Carney said. “No single piece of legislation, no single action will fully address the problem.”

He added that the president supports reinstating an assault weapons ban that expired in 2004.

California Senator Dianne Feinstein, a long-time advocate for gun regulations, said on Sunday she would introduce assault weapons ban legislation in the beginning of the next congressional session.

And New York City Mayor Michael Bloomberg, a vocal backer of stricter regulation, called on Mr Obama and Congress to pass several gun regulation proposals, including requiring a criminal background check for all gun sales, making gun trafficking a felony and a ban on assault weapons.

Newtown’s ordeal entered a new phase on Monday as Jack Pinto was buried in the Newtown Village Cemetery and Noah Pozner was buried at the B’Nai Israel Cemetery in the nearby town of Monroe.

The family of James Mattioli, six, also held a wake on Monday.

Noah Pozner, the youngest victim, was described by his family as inquisitive and mature for his age.

“It is unspeakably tragic that none of us can bring Noah back,” his uncle Alexis Haller said, according to remarks sent to the Associated Press.

“We would go to the ends of the earth to do so, but none of us can. What we can do is carry Noah within us, always.”

His twin sister, Arielle, who was assigned to a different classroom, survived.

Connecticut Governor Dannel Malloy and Lt Gov Nancy Wyman were both at the funeral, presided over by a rabbi.

In front of the funeral home, well-wishers placed two teddy bears, a bouquet of white flowers and a single red rose at the base of an old maple tree.

Later, hymns played at the funeral of Jack Pinto, described as a sports lover and a huge fan of New York Giants football player Victor Cruz – who wore the boy’s name inscribed on his boots during Sunday’s game.

At his funeral on Monday, many young children wore Newtown school football shirts.

One mourner, Gwendolyn Glover, told the Associated Press the funeral aimed to reassure others that they were now safe.

“The message was: You’re secure now. The worst is over,” she said.

The six-year-old was one of the youngest members of the Newtown youth wrestling association, and dozens of boys in gray Newtown wrestling shirts were at the funeral, as was his coach.

Connecticut Governor Dannel Malloy has declared a moment of silence for the entire state on Friday morning at 09:00 local time, a week after the shooting. He asked houses of worship with bells to ring them 26 times – one for each victim at the school.

Mr Malloy has also signed an executive order making an unused school in neighbouring town immediately available for Sandy Hook’s students – with classes reported to be pencilled in for Wednesday.

It could be months before the school building is available for use again because it remains an active crime scene. 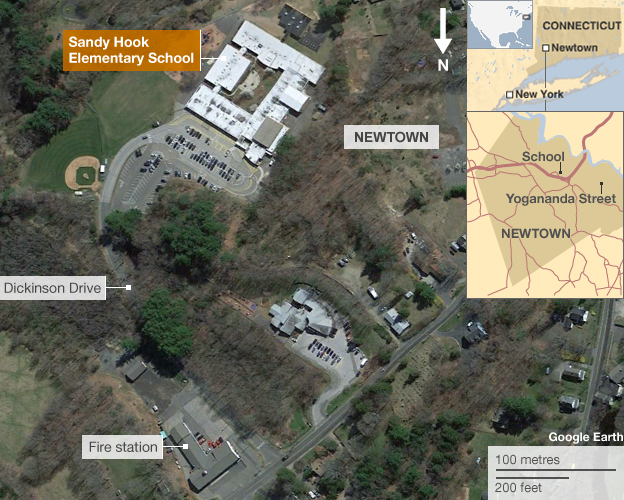 [UPDATE] As per the discussion below, I have added the following graph. This is Andy Schueler’s excellent home-made map which plots gun ownership per capita against gun deaths.