Supersymmetry – a theory in trouble?

An interesting article from the BBC looking at damage done to the suupersymmetry theory in particle physics.

Researchers at the Large Hadron Collider have detected one of the rarest particle decays seen in nature.

The finding deals a significant blow to the theory of physics known as supersymmetry.

Many researchers had hoped the LHC would have confirmed this by now.

Supersymmetry, or Susy, has gained popularity as a way to explain some of the inconsistencies in the traditional theory of subatomic physics known as the Standard Model.

The new observation, reported at the Hadron Collider Physics conference in Kyoto and outlined in an as-yet unpublished paper, is not consistent with many of the most likely models of Susy.

Prof Chris Parkes, who is the spokesperson for the UK participation in the LHCb experiment, told BBC News: “Supersymmetry may not be dead but these latest results have certainly put it into hospital.”

Supersymmetry theorises the existence of more massive versions of particles that have already been detected.

If found, they might help explain the phenomenon known as dark matter. Galaxies appear to rotate faster at their edges than the matter we see can account for, and one set of candidates for this missing dark matter is supersymmetric particles.

However, researchers at the LHCb detector have dealt a serious blow to hopes of finding them.

They have measured the decay between a particle known as a Bs meson into two particles known as muons. It is the first time that this decay has ever been observed, and the team has calculated that for every billion times that the Bs meson decays it only decays in this way three times.

If superparticles were to exist, the decay would happen far more often. This experiment is one of the “golden” tests for supersymmetry, and it would appear that this hugely popular theory among physicists has failed.

The result is at a statistical level of “3.5 sigma” – meaning that there is a one-in-4300 chance that the team would see the same “bump” in their data if the decay were not happening. This level makes the find worth further investigation, but falls well short of the 5-sigma level of certainty required for a formal discovery.

Prof Val Gibson, leader of the Cambridge University LHCb team, said that the new result was “putting our supersymmetry theory colleagues in a spin”.

The results are in fact completely in line with what one would expect from the Standard Model. There is already concern that the LHCb’s sister detectors might have expected to have detected superparticles by now, yet none has been found so far. 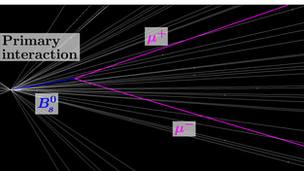 If supersymmetry is not an explanation for dark matter, then theorists will have to find alternative ideas to explain those inconsistencies in the Standard Model. So far researchers who are racing to find evidence of so called “new physics” have run into a series of dead ends.

“If new physics exists, then it is hiding very well behind the Standard Model,” commented Cambridge physicist Dr Marc-Olivier Bettler, a member of the analysis team.

The result does not rule out the possibility that super particles exist. But according to Prof Parkes, “they are running out of places to hide”.

Supporters of supersymmetry, however, such as Prof John Ellis of King’s College London, said that the observation is “quite consistent with supersymmetry”.

“In fact,” he said, “(it) was actually expected in (some) supersymmetric models. I certainly won’t lose any sleep over the result.”

• Quarks combine together to make, for example, the proton and neutron – which make up the nuclei of atoms today – though more exotic combinations were around in the Universe’s early days

• Leptons come in charged and uncharged versions; electrons – the most familiar charged lepton – together with quarks make up all the matter we can see; the uncharged leptons are neutrinos, which rarely interact with matter

• The Higgs boson came about because although the Standard Model holds together neatly, nothing requires the particles to have mass; for a fuller theory, the Higgs – or something else – must fill in that gap