Science Committees and Republicans – Meet the Experts (yes, dumber than a bag of hammers-type experts)

Ever heard of the “Committee on Science, Space and Technology” of the United States Congress? This committee has jurisdiction over: “all energy research, development, and demonstration, and projects therefore, and all federally owned or operated non-military energy laboratories” and it “shall review and study on a continuing basis laws, programs, and Government activities relating to non-military research and development”.

Well, let´s have a look at the chairman of the committee, Rep. Ralph M. Hall from Texas. Here´s part of an interview with Rep. Hall by Coral Davenport of the National Journal (NJ):

NJ: Do you think climate change is causing the earth to become warmer?

Hall: I can’t say it doesn’t have a percentage of effects on it – one percent, three percent, five percent. But I don’t think it’s the cause. I don’t think we can control what God controls.

We put $32 billion into it and don’t see very much change.

NJ: Last year the Proceedings of the National Academies of Science published a survey finding that 97 percent of scientists were in consensus that human activities lead to global warming.

Hall: And they each get $5,000 for every report like that they give out. That’s just my guess. I don’t have any proof of that. But I don’t believe ’em. I still want to listen to ’em and believe what I believe I ought to believe.

And  of course, Rep. Hall does not need no stinkin´evidence, his “guess” is good enough…

Ok, so we are off to a bad start. But maybe the other Republicans on the committee are competent.

Other republicans like Todd Akin. Does the name ring a bell? That´s right, the Todd Akin. The guy who is a little confused about how human reproduction works and who does not believe that women can actually get pregnant from “legitimate” rape, because “The female body has ways to try and shut that whole thing down.”

On to the next Republican in the committee. Meet Sandra “Sandy” Adams. A woman who believes that teachers should “teach theories that contradict the theory of evolution”, fought against funding for stem-cell research and wants to abolish the department of education.

http://www.rightwingwatch.org/content/meet-congresswoman-elect-sandy-adams-conspiracy-theorist-religious-extremist (click on this link and read what else this woman believes in, she also doesn´t like Muslims, immigrants and poor people…)

You have probably already heard of committee member Rep. Paul Broun. The guy who believes that Evolution, the Big Bang theory and Embryology(!!) are “lies, straight out of the pit of hell”.

While we mention him, please sign the petition to have this idiot removed from the committee:

Seen enough ? Believe it or not, there is another Republican in the committee who might be even dumber than the four we talked about so far.

Rep. Dana Rohrabacher – a guy who genuinely seems to believe that we should get rid of rainforests to reduce the production of greenhouse gases:

“Is there some thought being given to subsidizing the clearing of rain forests in order for some countries to eliminate that production of greenhouse gases?” the congressman asked Mr. Stern, according to Politico.

“Or would people be supportive of cutting down older trees in order to plant younger trees as a means to prevent this disaster from happening?” he continued.

Forestry experts were dumbfounded by Mr. Rohrabacher’s line of questioning….“

So, there you have it. The Republican experts on science, space and technology. The people who are responsible for oversight of public research in the United States of America.

What I find simultaneously shocking and amusing is, that these people do not seem to be lying to please the religious right – they are just dumber than a bag of hammers. Seriously, if you´d interview 100 random people on the street, I doubt that you would find even one who is this dumb.

And here is that link above copied out in full to show really quite how stupid this man is: 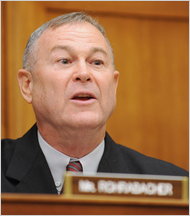 They reached that conclusion after hearing Mr. Rohrabacher declare during a Congressional hearing on Wednesday that clear-cutting the world’s rain forests might eliminate the production of greenhouse gases responsible for climate change.

On the witness stand was Todd Stern, the Obama administration’s climate change envoy, who was questioned on whether the nation’s climate policy should focus on reducing the more than 80 percent of carbon emissions produced by the natural world in the form of decaying plant matter.

“Is there some thought being given to subsidizing the clearing of rain forests in order for some countries to eliminate that production of greenhouse gases?” the congressman asked Mr. Stern, according to Politico.

“Or would people be supportive of cutting down older trees in order to plant younger trees as a means to prevent this disaster from happening?” he continued.

“He’s seriously confused,” said Oliver Phillips, a professor of geography at the University of Leeds in Britain and an expert on terrestrial carbon storage. “He’s just got half of the equation. Natural things decay, of course, but they also grow.”

The idea that cutting down forests would result in a net reduction of emissions is “crazy,” Dr Phillips added. “The need is to reduce deforestation.”

Beverly Law, a professor of forest science at Oregon State University, found another hole in Mr. Rohrabacher’s logic. Roughly 75 percent of the carbon dioxide emissions from the natural world come not from above-ground biomass, but from the soil, she said. “You don’t even want to give this guy another wacky idea, but he forgot about soil,” Dr. Law said.