I have to admit that the media coverage of the British Royals is often too sensationalist for me, not to mention that I generally don’t care about celebrity news anyway. But this one…I guess I had to bring up, perhaps as an antidote for all the grim material that has appeared recently on this blog:

On a recent trip to Australia, Prince William and his wife Kate Middleton were ambling toward their helicopter when a gust of wind stirred Middleton’s dress — and an international controversy.

Far away, a curly-haired Australian photographer named Diane Morel had just snapped a picture of Middleton. At the time, she didn’t know what she had. “It wasn’t until I got home,” she told the Sydney Daily Telegraph, “and I popped my camera card into the computer that I realized what I had captured.”

But there it was: Kate Middleton’s behind.

This clearly was a valuable commodity. But what to do with it? British tabloids, which are usually keen to publish just about anything, are famously hesitant to run images that scandalize their royalty. But a German tabloid named Bild had no such reservations.

Bild is refusing to back off its pics — which it ran again yesterday beside images of Kim Kardashian’s rear end — and other outlets have now joined the fray.

According to the Daily Star, the duchess is “furious.”

“Kate realizes she has a very public life,” said an anonymous source. “But she does believe she’s entitled to a certain amount of privacy. She doesn’t expect to see her naked [expletive] splashed across a German tabloid. She’s furious. She and Prince William are once again considering their legal options.” 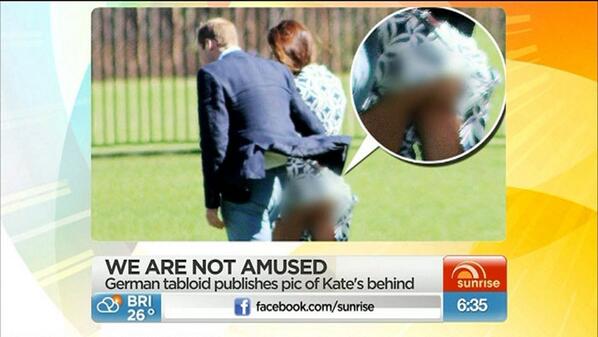 Which will be hilarious to watch. But it certainly is reminiscent of Genesis 33:

Since according to the New Testament Jesus is God, it puzzles me how come so many people met him face to face and survived.