Speaking of poorly defined words, one that strikes a particularly familiar cord with me is the “Zionists”. During my Islamic upbringing, I heard this word countless times a day from the state-run media. While “Zionism” is supposed to mean the philosophy behind the foundation of Israel, the word “Zionists” is used by many Islamists as a convenient straw man to knock down, very much like “Islamophobia”. The regime of Iran is probably the prime user of this fallacy. While the regime of Iran officially claims not to be anti-Semitic (its Holocaust denialism not withstanding), any Jewish person who, for whatever reason, they happen not to like, gets denounced as a “Zionist”. The following video, for example, is a compilation of presentations in which Mark Zuckerberg is condemned as a “Zionist” and Facebook, and even internet itself, are called conspiracies.

And of course, that is excellent material to use for a comedian. Perhaps none better suited to do so than Sacha Baron Cohen.

Cohen, himself Jewish,  played a fictional anti-Semite in his 2006 movie “Borat” and managed to get people to mouth on camera their ugliest racist and anti-Semitic remarks that they probably wouldn’t trust otherwise to anyone but closest friends. But it was in his 2012 “The Dictator” that he had the most fun making a mockery of Islamist heads of states. 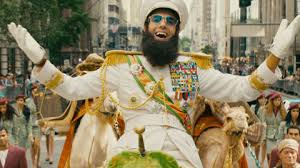 And then he played a nice prank at the 2012 Oscars: he walked on stage dressed as “the Dictator” with an urn he claimed contained the ashes of Kim Jong Il (aka, “Dear Leader”, the former dictator of North Korea), and poured them out all over someone. While the content of the urn was just pancake mix, he obviously was escorted off the stage. But this “affront” sure couldn’t have been anything but a “Zionist” conspiracy, to an Islamist dictator.

While I would go so far as the say Cohen’s mockery of Islamists was a great as Charlie Chaplin’s representation of Hitler in “The Great Dictator“, his depicting of seeing “Zionists” everywhere (about to get him) certainly is authentic.