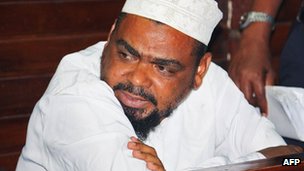 As often happens in African nations where Muslims and Christians are neighbors, the mutual love of Children of Abraham broke to the surface today in Mombasa, Kenya, after the assassination of a Muslim cleric named Aboud Rogo Mohammad. (Above, from the BBC). Subsequently, mobs took to the streets, burning cars and vandalizing churches. 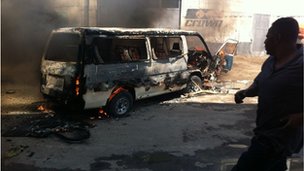 So who was the good cleric whose death sparked such rage?

The UN Security Council imposed a travel ban and asset freeze on him in July, saying he had provided “financial, material, logistical or technical support to al-Shabab”.

It accused him of being the “main ideological leader” of Kenya’s al-Hijra group, also known as the Muslim Youth Centre, which is viewed as a close ally of al-Shabab.

He had “used the extremist group as a pathway for radicalisation and recruitment of principally Swahili-speaking Africans for carrying out violent militant activity in Somalia,” the UN added.

But apparently all this was just a warm-up.

According to police, Rogo was arrested with firearms, ammunitions and detonators in his house. He was accused of planning acts of terrorism.

So the guy the rioters were seeking to avenge himself knew a thing or two about killing. Nice.