[Another] COLTS bus driver complains about “God Bless America” removal, but no support for “Atheists.” ad 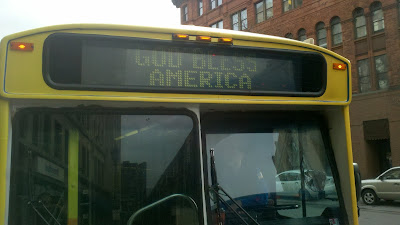 The message of “God Bless America,” quite loud and proud, was displayed on COLTS’ buses for years, but the “Atheists.” ad isn’t allowed. A bus driver, writing a letter to the editor of a local newspaper, complains about the removal of “God Bless America,” but he voices no support for atheists. Shouldn’t we be allowed to advertise the fact that we exist…? Is that too much to ask?

A bus driver for the County of Lackawanna Transit System (COLTS), Vincent Cerullo, wrote a letter to a local newspaper in Scranton expressing his disagreement with his employer and — without arguing that I should have freedom of speech/the right to advertise the NEPA Freethought Society’s “Atheists.” ad inspired in part by Richard Wade and atheist activist Carl Silverman on county buses — that COLTS should return the “God Bless America” message on its buses that was taken down after I had filed a complaint with the Freedom From Religion Foundation and wrote an article concerning the matter.

Justin Vacula wants to advertise for atheists on COLTS buses, which are operated by Lackawanna County. He is up in arms because the COLTS board of directors will not allow this request. He has threatened a lawsuit and has soaked up media attention.

The COLTS drivers are no longer allowed to put “God Bless America” on the head signs of the buses because of this. We have been proudly advertising this for years and we should still be able to show this on the bus.

The COLTS board should recognize its error and go back to putting “God bless America” on the buses.

Of course, if COLTS allowed Mr. Vacula to advertise his atheist website, he would have to pay for it with money that says “In God We Trust.”

The COLTS board can make a stand and do the right thing.

The bus driver assumes that “God Bless America” was taken down because I wanted an advertisement with the word ‘Atheists’ which COLTS’ solicitor and other personnel have deemed — despite its intentionally uncontroversial nature with the purpose of being the most inoffensive atheist bus ad ever — an attack on religion and a debate about public issues.

The “Atheists.” ad, though, was not the reason “God Bless America” was taken down. According to the Vice President of the union representing COLTS, the “God Bless America” message was removed because — regardless of the merit of this reason — people can find the message to be offensive…and presumably the board of directors made this decision.

Surely there was a problem with “God Bless America” being on buses…or otherwise COLTS would not have taken it down, right? We see, from the Vice President’s comment, that there was a problem [and it was not because the “Atheists.” ad was submitted]. It could, though, be the case that COLTS did this in response to me proposing the “Atheists.” ad (as the bus driver asserted), but that’s not what COLTS or the union’s Vice President is saying. Is the bus driver really writing this letter to the editor in a local newspaper publicly saying that COLTS and the union’s Vice President, are being dishonest or lying?

The crucial question for COLTS, though, is this: If COLTS has acknowledged that there are sufficient reasons for not having the “God Bless America” messages, why is this a sudden epiphany? Surely the same reasons for taking the “God Bless America” signs down would have been enough justification to do so right after they went up on buses years ago. Why should it take a complaint to remove the message?

I find it quite humourous and disturbing that this bus driver is complaining about “God Bless America” being absent from the bus (and that he’s writing a letter to a local newspaper in open disagreement with his employer who is doing the wrong thing), but he didn’t mention support of the “Atheists.” ad being on the bus.

I have contacted the bus driver via his Facebook profile (yesterday) to discover what his stance is (and he still hasn’t responded), but considering his jabs at atheists it is probably the case that he wants “God Bless America,” but he doesn’t want the “Atheists.” ad on the buses.

Funny stance, that is. Worry not about the freedom of speech of atheists concerning this issue. The freedom of speech of Christians is all that seems to matter to this bus driver. I am sorry to burst the driver’s bubble, but atheists are citizens too. Is being allowed to advertise a group and reach out to fellow atheists really so much to ask? Do we really strike fear in your hearts considering that an all-loving, all-knowing, all-powerful god is supposed to be on your side? Is your faith that weak that it can’t withstand a simple bus ad that isn’t even questioning religion? Sorry, but your twisted ideas of freedom of speech and your religious beliefs are no good reason to censor atheists.

In a final really weak jab at me, the driver writes that the money I would give to COLTS would say “In God We Trust,” but it can always be crossed out with a permanent marker…and a check or credit card would likely be the ‘tender.’ This assertion is almost as silly as the appeal to tradition the bus driver evokes. Because the ads were up for so long and it has allegedly not been a problem before I mentioned something, the ads must be permissible! Not so much.

I’d like to see some bus drivers supporting the “Atheists.” ad.

Perhaps I will be waiting a long time, though…and there are now two bus drivers (the other being Daniel Wittenbreder) who have been public in one way or another about their disapproval.

Time is ticking for COLTS.

What will their decision be?

Are they really going to go to court and waste taxpayers’ money considering that the county, on some accounts, is broke/bankrupt and the bus fares must raise to keep COLTS in business…over a simple advertisement that has the word “atheists” on it? What are the priorities of this county and board of directors? It is quite the odd situation, I think, when a governmental entity refuses funds. Apparently, our dirty stinking atheist money (which will be at least one thousand dollars) — with or without “In God We Trust” — is no good for them.