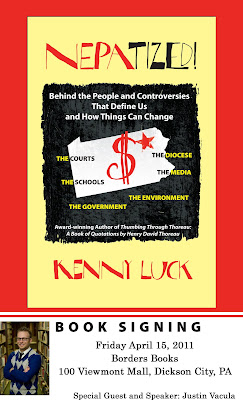 Since 2008, Northeastern Pennsylvania has been the crossroads for presidential politics, the national media, and, above all: Fraud. Dominating the headlines are stories of greed and controversy; news reports that reveal the corrupt, the immoral, and the idiotic. With so much attention given to the region in recent years, it inevitably leads one to ask: Who and what defines us?

NEPATIZED! investigates the most recent scandals, controversies, and corruption in Northeastern Pennsylvania. With more than thirty interviews by local politicians, media figures, and activists, this book takes a critical look at some of the people and events that have redefined the region. Lou Barletta’s anti-minority rage; Bishop Martino’s divinely-inspired bigotry; and Steve Corbett’s cacophonous diatribes are all part of, what the author calls, “a spectacle of unequivocal idiocy.”