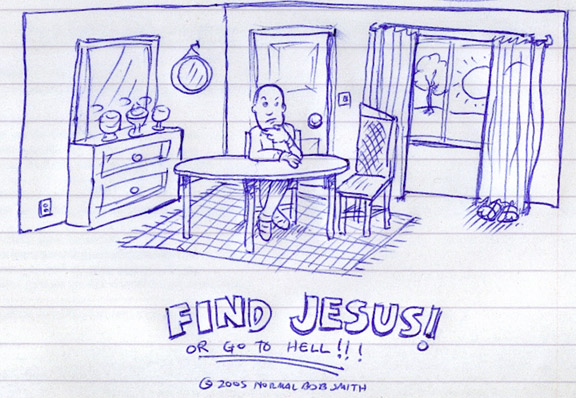 My blog and Facebook profile typically have lively positive discussion that is engaging, but I get quite a large deal of hate mail. As always, I welcome discussion, but little discussion is had when people offer personal attacks, wish that someone would shoot me, and tell me to come to a dorm room so “my fat face can get fucked up [for Jesus].” Of course not all theists are like this, but many of these people are indeed your “average Joe moderates.”

These are “regular, everyday people” who aren’t the fundamentalists on TV that so many put all the blame on. These people are representing their religion (they are members of it, of course) with nothing but hate. And what, you ask, provokes such a visceral response? Perhaps you would expect this kind of stuff to be said to corrupt judges, rapists, or child molesters. Perhaps you would expect the most hated people to be the criminals in society. Nope. I’m the third most hated person in Luzerne County because I am publicly open and active about my skepticism and I filed a complaint against an illegal nativity scene that even courthouse officials admitted was wrong.

Recently, I got this nonsense from an anonymous blogger who hasn’t read much of anything I have said, but took the time to type this:

Do you have a life or do you just think about this shit all day long?

I think people like you and religious watchdog groups are fucking pathetic. Get a life and concentrate on something important. You are actually infringing on people’s First Amendment rights to practice religion by opening your mouth. I don’t understand why you focus on this stuff so much. Maybe if you got a real job, you wouldn’t have to ask for donations on your blog.

I know that by commenting this I will only fuel your fire of how people hate you. “I’m the most hated person in Wilkes Barre.” that was you once quoted in the newspaper after you called the ACLU about the nativity scene. I think you should leave the elderly alone because they love religion and let them have their nativity. I saw a older woman cry outside the courthouse after they took down the nativity.

By expressing that I know this will only fuel your fire, I am no longer going to not say how I feel. You are ridiculous. You will never be famous only infamous and nothing is good about that. Even Michael Moore listens to the other side of the story, you just criticize.

I will end with this. May God Bless You and Keep You.

I followed-up with this simple response:

I really love people like you, previous poster. Instead of offering any argument on any of my 100+ blog posts, you simply send hate and offer personal attacks. Your fallacious assumption that I don’t have a life is hilarious because I’m a fourth year college student who has two jobs and am quite involved with many activities and leadership roles.

How, exactly, are I depriving people of the freedom to worship by arguing that their religious ideas are false?

I never said that I was the most hated person I Wilkes-Barre. KRZ DJ Jumpin’ Jeff Walker called me the third most hated person in Luzerne County. I wear this as a great badge of honor because it proves my point on so many levels. This demonstrates that religion is divisive as I have argued it is, moderates can be hateful people and part of the problem, people can turn their brains off when religion is involved, people lack critical thinking skills, and religion can do a great deal of harm. The nativity issue was a legal one, not a religious one. The arguments were and still are on my side and the courthouse officials even admitted they were wrong!

What do you mean “Leave the elderly alone?” All I am doing is upholding the law and voicing my opinions in the media, online, etc. I’m not knocking on doors handing out papers to people or anything like that. How can a dissenting opinion that is civil bother people so much if their beliefs are so substantiated, anyway? They should follow the advice in the Bible (1 Peter 3:15) and give arguments for their beliefs. How can a dissenter be such a bother in the face of God, if he exists?

I welcome disagreement on my blog, on my profile, and everywhere. If you don’t agree, say so and dictate why. We can have a conversation instead of offering personal attacks, non-sequiters, etc.

It’s also silly to suggest that I don’t listen to the other side of the story because I listen (and post) debates from “the other side” and go to various religiously-themed events, and discuss these matters with other people frequently.

Thanks for brightening my day and proving my point!

I’ve previously argued that religion is divisive. Since I’ve been an atheist, I’ve lost friends [who really weren’t my friends], have been lambasted by family members, and have received the ire of an entire county to become the “third most hated person in Luzerne County.” First, as many have suggested, I did not bring this upon myself and it’s not my fault. My former friends and family were the ones to break the ties and that is solely on them. Their actions led to the termination of those relationships. If you’re going to cease talking to me because of a disagreement about politics and religion, there’s a serious problem and something is wrong with the picture. What, besides religion… crime, substance abuse, and similar directly harmful stuff can possibly cause so many ties of friends and family to be severed? It’s odd to put religion next to crime and drugs, but it is what it is.