Below is a special guest post by Dean Hougen, who describes himself as a lifelong advocate for privacy, free speech, civil rights, and civil liberties. He originally wrote this for his Facebook wall, and I asked him if I could share it here. I have edited it to include links where appropriate. I have seen numerous posts to Facebook about a bill put forward by Oklahoma State Senator Don Barrington. Many people seem very concerned that Barrington’s bill would ban one of their favorite articles of clothing — hoodies. It wouldn’t. Some are also concerned that the bill would ban Halloween costumes. It wouldn’t do that either. But you shouldn’t calm down, you should get more worried because what it would do is far worse: outlaw anonymity in public.

I can see where people got these mistaken ideas. The reporting on this in the popular press has been abysmal. So, instead, read the actual text of the bill itself. Go ahead and read it. I’ll wait.

Okay, now that you’ve read it, here are some reasons why I oppose it:

First, there are numerous very good reasons why law abiding citizens might want to conceal their identities when in public. Consider a person trying to escape an abusive relationship, someone who has a stalker, a celebrity who doesn’t want to be hounded by fans or the media, or an employee who wants to attend a political event but doesn’t want to be fired when their employer with very different political views watches coverage of the event on the news. Yet all of these people would be made criminals by this proposed law if they intentionally concealed their identities “in a public place by means of a robe, mask, or other disguise.”

Second, simply wanting to be anonymous in public is reason enough. If you want to travel from place to place without the government tracking your every move, you should be able to do just that. The government has no business spying on you and prying into your private life without cause. As Justice Louis D. Brandeis put it in his dissenting opinion in Olmstead vs. United States:

The makers of our Constitution undertook to secure conditions favorable to the pursuit of happiness. They recognized the significance of man’s spiritual nature, of his feelings and of his intellect. They knew that only part of the pain, pleasure and satisfactions of life are to be found in material things. They sought to protect Americans in their beliefs, their thoughts, their emotions and their sensations. They conferred against the government, the right to be let alone—the most comprehensive of rights and the right most valued by civilized men.

Yet this bill would strip from us the right to be let alone when we’re out in public.

Third, does anyone really believe that this law would be applied equally? The level of discretion here is outrageous. It would be nearly impossible to prove bias on the part of an officer who claimed that this person had a hood up and pulled too far forward but that one didn’t. This is just asking for abuse.

Fourth, all of Section 2 of the proposed bill:

It being immediately necessary for the preservation of the public peace, health and safety, an emergency is hereby declared to exist, by reason whereof this act shall take effect and be in full force from and after its passage and approval.

An emergency? What emergency? Have gangs of masked marauders reduced our civilization to chaos when I wasn’t looking? Obviously not. So why does anyone feel the need to include this language in the bill? I think the answer is pretty clear. This abrogation of our right to privacy will require strong justification. This supposed emergency is that justification. 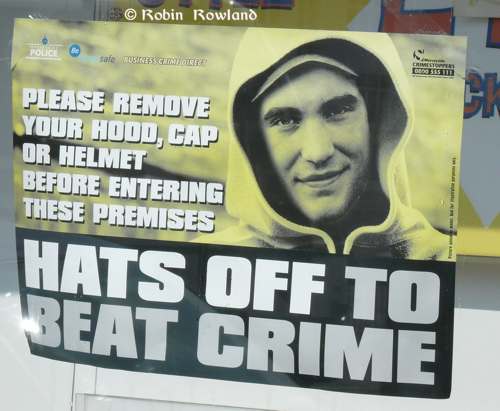 Now, I have seen some people defending this bill and claiming, for instance, that businesses are plagued by hooded criminals who are harder to track down because their identities are concealed. However, it is already “unlawful for any person in this state to wear a mask, hood or covering, which conceals the identity of the wearer during the commission of a crime or for the purpose of coercion, intimidation or harassment” as the proposed bill puts it. What the proposed bill would do is make it also unlawful for a person to “intentionally conceal his or her identity in a public place by means of a robe, mask, or other disguise” even if that person was otherwise behaving lawfully and wasn’t bothering anyone!

Of course, this brings us to the real reason for this bill. I can’t know for sure what Senator Barrington or anyone else behind this bill is thinking but I can imagine how this law would actually be used.

One use would almost surely be to stop people (often young, black men) on the street and have a pretext for demanding identification from them, detaining them, or even arresting them. People who are otherwise going about their lives in a lawful way. Again, this is just asking for abuse.

Another use would be to help the government identify protesters at marches and rallies. Currently, it isn’t uncommon for some protesters to conceal their identities (and, as I’ve described above, they may have very good reasons for doing so). As long as they act within the law, there is no pretext for demanding that they do otherwise. This law would provide that pretext.

In total, this is just big and intrusive government with no public benefit that I can see.