The following unpublished letter to the editor of the New York Times from 1957 was recently unearthed in a file cabinet from the basement of the NYT building and sent to me. It was apparently dismissed as the ramblings of a madman at the time, perhaps inspired by the increasingly heated Cold War space race between the U.S. and the Soviets. After much consideration, I have decided to publish it here (with some illustrations and hyperlinks added to provide some backstory) as I think that it can be of great use to those of us interested in how the mind justifies and makes sense of information.

To the Ruler of New York Times and the People of Earth:

I am Dulcian, the head of the Clarion public relations department. I am distressed about the way the story of my planet saving Earth by selecting a few mighty warriors is being told by some of your “scientists.” As such, I would like to shine a light on the spurious theory of cognitive dissonance which has erupted from these flagrant stories of our people.  Therefore, I submit this letter to your local, and may I say obsolete, communication of world information paper. Let me begin by telling you a story.

In a galaxy far, far away, the citizens of the planet Clarion were in great distress over the destruction they would soon release on the planet you know as Earth. They searched for a prophet to deliver their message of salvation, hoping to save any humans intelligent enough to believe in their power of destruction which would come in the form of a flood. They felt their chances of a good following were pretty high, since they had seen the hordes of humans connect to a deity that only rumored a flood. Much to the delight of the Clarionites, an Earth woman was found who was skilled in the practice of automatic writing! As this happened which happened to be their only method of communication, there was much rejoicing at this fortuitous coincidence.

Ms. Dorthy Martin of Earth was selected by the Elder Brother, or as humans would call him “The Big Cheese.” He contacted her, groomed her and tried to ease her mind to accept his messages. Elder Brother told her through automatic writing that

I am always with you.  The cares of the day cannot touch you.  We will teach them that seek and are ready to follow in the light.  I will take care of the details.  Trust in us. Be patient and learn, for we are there preparing the work for you as a connoiter.  That is an earthly liaison duty before I come.  That will be soon.  You were directed to tell your experiences of my coming to you, for it prepares the way in their hearts.  I will come again to teach each of you.  They that have told you that they do not believe shall see us when the time is right.

This gave her great peace and conviction for the truth of the Clarion people.

A few days after the Earth holiday Easter, Mrs. Martin received another communication from one of The Elder Brother’s assistants. It promised to teach her “many truths you do not understand.”  The message continued:

What can you do for us?  Well, you can go tell the world that we have at last contacted the Earth planet with the waves of ether that have become tactable by the bombs your scientists have been exploding.  This works like an accordion.  When the condensation leaves the carceious level of the ether or atmosphere levels that support a large light layer of marine life, it causes a barrier to be set up.  Now that the bombs have broken that barrier we can break through.  That is what your scientists call the sonic barrier.  We have been trying to get through for many of your years, with alcetopes and the earling timer.

She was a wise prophet and took heed to our warnings. Soon Mrs. Martin and the followers had formed a group referred to as The Seekers. They left their soon-to-be-destroyed lives and prepared for December 21st 1954. The Seekers shut out the outside world, sold off all of their earthly goods and gave any monetary gain to the advancement of the church. In the final days they spent their time in prayer to the Elder Brother, some begging not to die, others begging to be taken up to Clarion. They were the perfect mix of loyal apostles and slaves to fear, exactly what we look for in a group of believers. On the day of the reckoning The Seekers awaited the arrival of the UFO that would transport them to their new home. As the sun rose at dawn, revealing December 22nd, they realized that the world was spared. This was due, of course, to their devotion, as Elder Brother did not flood earth to save them or reveal himself to the Seekers, as decided he had little patience for first planet problems. The Seekers were greatly relieved to hear such an explanation, as delivered through Mrs. Martin! They would have felt pretty out of touch with reality, dissonant even, if they had given up their entire lives for a crazy alien lady. As such, even after the prophecy “failed” (in the words of your so called scientists), many stayed true to the cause. They brought in more followers and many eventually found their way to other groups, including the Fighters against Xenu.

What The Seekers had not realized was that there was a wolf in their fold, a Judas in their midst, a man who would betray their strong held belief and even use them in a research study. This man was Leon Festinger and, with his minions Henry Riecken and Stanley Schachter, he was no true believer. Instead, he fancied himself a scientist, a psychologist, and was just there to measure the arousal of dissonance and the enthusiasm to spread the word to ease the pain that dissonance caused. This ridiculous scientific behavior is probably why Clarion wanted to destroy earth in the first place. 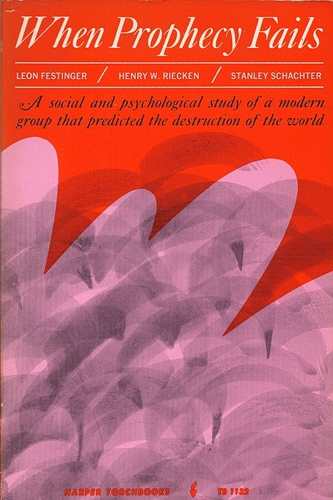 Showing his disdain for the revealed truth of Clarion, Festinger and the minions even published a book, with the ridiculous title of When Prophecy Fails: A Social and Psychological Study of a Modern Group That Predicted the Destruction of the World. In it, they claimed that after the prophecy “failed,” The Seekers experienced what they termed Cognitive Dissonance. They went on to state:

The existence of dissonance, being psychologically uncomfortable, will motivate the person to try to reduce the dissonance and achieve consonance….When dissonance is present, in addition to trying to reduce it, the person will actively avoid situations and information which would likely increase the dissonance.

Absurd! The nerve of this “theorist”, claiming that the only reason The Seekers began proselytism and became hopelessly devoted to the salvation of planet earth via aliens and UFOs was just to reduce their own inner discomfort and bring their beliefs back into harmony. If I had to guess the flow of this whole dissonance charade it might something like this:

Surely, if this “cognitive dissonance” were real it would occur elsewhere! Take, for example, if a person is a smoker and has received a pamphlet in the mail about the dangers of smoking, this “theorist” would say this would elicit dissonance, causing the person to explain various reasons he continues to smoke, so his beliefs and ideas would be justified and in harmony. I am positive the person is correct in believing that smoking will make him gain weight, which is surely equally bad for the health. Therefore, the man must continue smoking to save himself from dying a fat, nicotine-free man.

It is safe to say Festinger, the minions and even this wacky group known as “psychologists” believe that cognitive dissonance is not healthy for humans. Being unaware of conflicting beliefs and behaviors seemingly limits the ability to think clearly, make informed decisions and live a life of inner peace. These master mind ninjas even claim to actually use the feelings of cognitive dissonance to bring awareness to unhealthy thought patterns. Clients are encouraged to identify current attitudes and behaviors, the costs involved in holding these particular attitudes or engaging in the negative behaviors and are asked to constantly challenge the attitudes and behaviors to break the cycle of cognitive dissonance. Nonsense, I say!

I thank you for keeping an open mind in regard to this foreign and absurd theory of cognitive dissonance, and hope that you learn to pursue THE TRUTH, as Mrs. Martin did.

(Editor’s note – if you’d like to read more about cognitive dissonance and religion, I’d recommend Dawson’s “When Prophecy Fails and Faith Persists: An Overview“)