If It Seems Too Easy, It Probably Is: An Inquiry into the Placebo Magic of Power Bands

If It Seems Too Easy, It Probably Is:  An Inquiry into the Placebo Magic of Power Bands by Stephanie Menotti

We have all had the pleasure of bearing witness to the phenomenon that happens when a celebrity endorses a product.  Images of a pre-adulterous Tiger Woods sporting his ever trusty Nike visor, pre-steroidal Lance Armstrong perched atop his yellow kingdom, and even pre-retired Michael Jordan prancing around on the Hanes commercials, flood my mind.  Recently, famous athletes like Shaq, Lamar Odom, and even Oklahoma City’s own beloved Kevin Durant have been spotted branding and endorsing specific rubber wristbands known as the Power Balance Bands, claiming the power of the bands benefit their game play and abilities.

For those of you that aren’t up with the times, a Power Band is a small silicone bracelet that is sold in a variety of eye-catching colors (some are even marketed with sports teams and logos) to appeal to the desires of a variety of people including teens and young adults.  The power of the power band is derived from a holographic symbol located on the top and bottom of the band. The power band website claims this power is “based on Eastern philosophies of ancient health and wellness and bound in holographic form”.  Pietro Baio is a certified chiropractor whose credentials indicate a specialization in sports rehabilitation chiropractic methods, which the company utilized as support for their medical claims to the efficacy of their product; they were unable to gain the backing of any legitimate medical professional or scientist.  The power band’s claim to fame is a purported immediate increase in agility, strength, balance, and flexibility to the wearer of the band.  All this can be yours for an estimated $30.00 per band that is of course, if you decide on the original version.  You can always elect to invest in the “Viper” model, or the “Evolution” model, which are (rightfully so, I would imagine) a bit pricier.

Because these bracelets gained so much popularity and so much momentum in the marketing industry in late 2011 and early 2012, much attention was been given to the extraordinary claims made by the company.  Any good skeptic knows that “extraordinary claims require extraordinary evidence” and the researchers backing this ionic balance phenomenon tried really hard to appear legitimate, as indicated by this gem of a pseudoscientific study.  When the company selling the bracelets was unable to provide sufficient scientific evidence to support their claims, many in the scientific community and beyond decided to seek the information on their own.

Over the last year, many criticisms of the power balance mantra have been expressed, and several publications and negative media assessments have been released.  A team of researchers from the University of Wisconsin assembled to produce some solid scientific explanations for the debunking of these bracelets, and when the study was completed the results indicated that there is no evidence to verify the claims made by the power balance company.  In fact, the primary investigator on the study, John Porcari, concluded that, “Invariably, the subjects always did better on the second trial, and it didn’t matter which bracelet they were wearing.” He attributes these results to what he calls the “order effect,” as in the order in which the trials were administered affects the outcome of the trials.  For example, everyone in the study performed more poorly in the first trial than they did in the second trial, because in the second trial the participants were prepared and knowledgeable about what to expect.  Whether they were wearing the placebo band or the actual power band was not a factor.  The body has a natural ability to implement a learning curve, and that is how we are seeing the effects of an improvement in the power balance demonstrations.  Porcari investigated his findings further, in another scientific research study coming out of the University of Wisconsin Kinesiology department on the effects of the power band, and was able to replicate his findings.  Porcari ultimately concluded that the so-called abilities that are associated with this bracelet “really shows the power of the placebo effect”.

As if scientific evidence and research isn’t enough, the sports network ESPN also sent their own journalists into the arena to do some investigating.  In the short video below, the audience is walked through the logic behind the power balance bracelets, exposed to interviews with the star athletes that swear by their bracelet’s powers, and why that logic does not align with sound scientific methods.  Interestingly, Kevin Durant claims that he does not believe the power band has any special powers unless the individual wearing the bracelet believes in those powers.  He really only wears it, “to make a fashion statement, because it looks cool”.

Ultimately, science has indicated that these bracelets do not actually hold any special powers, to the dismay of many Americans (and people across the world) that have invested in the latest hoax of quick-fixes. Noted Australian skeptic Richard Saunders helped to lead the charge of the debunking, and can be seen in this video demonstrating why those “tests” are bunk.

One positive outcome to the lasting effects of the power balance craze was the fact that this caused people everywhere to investigate the erroneous claims made by money-making schemes a little more closely, and to at least pave the way towards holding these companies accountable for their actions.  Australia recently required the power balance company to publish a comprehensive statement indicating that they were falsely advertising their product.  An excerpt from that statement is as follows:

In our advertising we stated that Power Balance wristbands improved your strength, balance and flexibility. We admit that there is no credible scientific evidence that supports our claims and therefore we engaged in misleading conduct in breach of s52 of the Trade Practices Act 1974.

According to this law, anyone that has previously purchased a power balance band (in Australia) is entitled to a full refund under this ruling!  Further, an investigation into the effects of media and celebrity endorsements was done by collaboration between The University of Massachusetts-Amherst and Western New England College, which outlined the specific FTC agreements that were affected by the exposure of the lack of scientific evidence in many business claims—the Power Balance company being a primary example in this paper.

In my previous post I mentioned the statistic that approximately 40% of Americans participate in some type of homeopathic remedy or engage in some form of pseudoscientific behavior, and this statistic was shocking to me.  However, after reading about how many people have jumped on the power band bandwagon (see what I did there?) this statistic is no longer surprising.  People commit to endorsing pseudoscientific facts even when we do not realize we are doing it just because we fall prey to the appeal to authority fallacious thinking, and that makes for a very precarious situation for our belief system and world schema.  This fallacious way of thinking and approaching the world is not only dangerous to the common naïve individual, it also propagates the laziness behind why we do not seek out better answers for ourselves and why we as humans attempt to find the quick fixes and easy ways out. 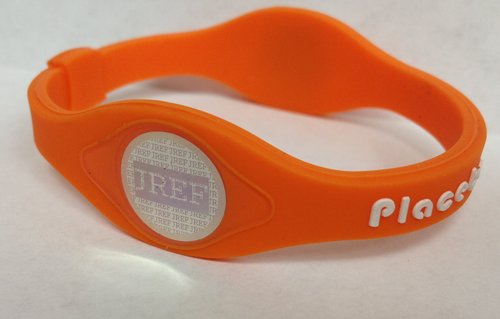 If you are squirming now and feeling infuriated by the severe deficit of the application of skepticism and scientific thinking among our fellow humans, and you cannot seem to quell the deep sadness in your heart for not having the available opportunity to be trendy and fashionable by sporting a pretty rubber band around your wrist, then do not despair for there is hope for you.  James Randi, the colloquial “godfather” of skepticism and overall curator of science awesomeness has lent his foundations name to these Placebo Bands for a pocket busting $4.00.  The greatest part about this (other than the extremely hip and desirable JREF hologram) is the fact that one dollar from every purchase goes directly to the James Randi Educational Foundation to encourage scientific research, and to stop all of the fraudulent hoaxes that are so prevalent in our society.

The notion of power infused jewelry, while very romantic and tempting, is nothing more than a money-making scheme ripped directly out of the popular Skyrim video game.  I had the protection and powers of magic jewelry once, but then I took an arrow to the knee and realized it was all complete bullshit.