In case you didn’t know, I live in Oklahoma. While I greatly love my state and it’s people (despite how I tend to feel about a number of our elected officials and the occasional derp), the religious fundamentalism that runs rampant is quite trying at times. A case in point is the fact that, as of November 2012, a six foot tall monument of the Ten Commandments has been in place on the state capitol grounds. Never mind that it’s an obvious violation of church-state separation (a cornerstone to a free republic), or even that it had several embarrassing misspellings when it was first erected, or that (despite what many, including the funder of the monument like to claim) this country was not founded to be a Christian nation. The erection of this monument is such a giant mistake that not only do the ACLU, odd Oklahomans, and atheists think it’s a bad idea, but even a Baptist minister does. And, it’s now coming back around to bite State Representative Mike Ritze (who sponsored the bill allowing the Ten Commandments to be placed and whose family paid for it) and company in the ass.

As you’ve probably read from numerous other sources, the Satanic Temple has applied to place a monument on the state capitol grounds to “complement” the already existing Ten Commandments monument. And they’ve even got it funded already, to the tune of over $25,000. This is the same group that performed a “Pink Mass” to protest the Westboro Baptist Church. If you’ve not seen the design yet, it’s really a quite interesting piece of statuary: 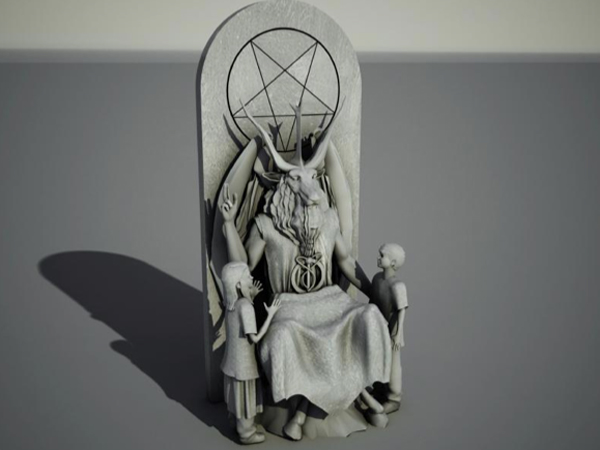 The central, seated figure there is a representation of Baphomet. For those not familiar with the name and image (after all, it’s certainly not the pitchfork, cloven hooved Devil that most would think of when they hear the term “Satanist”), I’m not too surprised. Apparently the first time it was used was almost 1,000 years ago as a corruption of the term Mahomet. Mahomet is the Latinized version of Muhammed, the prophet of Islam, and the term was from a letter by a crusader describing a battle with Muslims. The more modern usage dates only to the past 150 years, in particular the below image by one Eliphas Levi. More recently, the Church of Satan adopted it (seemingly after Aliester Crowley’s obsession with the figure) as a major symbol in it’s rituals. It is traditionally viewed in the CoS as a symbol of Satan in their particular church, and so is synonymous with “the Devil” as most people would think of him. As a fun fact, Baphomet is also a comic book character, featured in a few Marvel Comic tales, mostly as a villain battling the oddly named hero Son of Satan. Why, he’s even a central character in one of those ever fun, never in any way factually accurate Chick Tracts!

“So,” you might be saying to yourself, “the Satanists worship this idol, eh? It’s how they represent Satan, right?”

Well, no and yes.

To understand why they wouldn’t worship it but why it does represent Satan, you need to understand that most Satanists don’t worship Satan. It’s not like Christians who worship the Christ, or Muslims who venerate Muhammed, or Buddhists who try to emulate Buddha. See, most Satanists aren’t theistic. That’s right, most Satanists are actually atheists*. This is particularly true for those following the teachings of Anton LaVey, who founded the Church of Satan in 1966, and offshoots of that movement. In fact, the official CoS website even includes this gem of a phrase:

Satanists do not believe in God, Satan, Heaven, or Hell.

You don’t get much clearer than that, do you? This type of atheistic Satanism includes The Satanic Temple (the one raising money for the Oklahoma monument), which is a “non-supernatural religion” that uses the symbolism and metaphor of the literary Satan of Milton, France, and Twain. They are extraordinarily clear about this on the front page of their website, where they say:

Satan stands as the ultimate icon for the selfless revolt against tyranny, free & rational inquiry, and the responsible pursuit of happiness….Belief must reconstruct itself to fact, never the other way round. This is the Luciferian impulse to eat of the Tree of Knowledge, even (and especially) when to do so irretrievably dissipates blissful and comforting delusions of old.

They also have seven central tenets that members attempt to follow:

Wow, what a terrible sounding bunch of folks, right? Here’s a bunch of atheists, emphasizing rationality and reason, being nice to others, social justice, owning up to mistakes we make…what a bunch of assholes, eh? Why, reading those things make it seem like they might almost be a bunch of filthy humanists!

So why would a bunch of atheistic humanists want to put up a statue of a big goat-headed dude in a chair? Well, the spokesperson for The Satanic Temple, Lucien Greaves (which is definitely a better name for the role than Doug Mesner – his legal name), had this to say to the LA Times,

More than anything, we feel our monument is meant to be a historical marker celebrating the scapegoats, marginalized and demonized minority….We have this rejection of arbitrary authority and respect for personal sovereignty. It doesn’t matter if you are doing good in the name of Satan or the name of Jesus Christ, as long as you are doing good.

So, this type of image (Baphomet) is being used as an easily recognizable symbol of “Satanism” to stand in contrast to the easily recognizable symbol of the Ten Commandments. In effect, this is to protest the lack of church-state separation that the Ten Commandments monument embodies. What it’s not for is to say “Hey, we sacrifice babies and drink blood! We think there is a real supernatural anti-God out there and we worship him!”

I also think it is specifically for something else. What? In my opinion, trolling. That’s right, The Satanic Temple is real-life trolling the Oklahoma legislature. Epically trolling them, in my opinion. And hundreds of people are helping by donating money, writing articles all over the world about, and giving this a huge amount of attention. The below image (which I ‘shopped from here) sums up this whole shebang for me. Well played, Satanists. Well played. Not everyone is jazzed about the monument or the trolling it represents. Obviously, many Oklahomans are upset by this (mainly because they seem to think these folks are “real” (and by real, I mean the actually not-real, baby-killing, Devil-loving) Satanists. The ACLU is upset because it doesn’t think any monuments with religious themes should be allowed. And the original Church of Satan has disavowed any public monuments to Satanism, and even called the design of this particular one “crudely designed.”

I tell you, you just can’t please anyone nowadays.

* There are a small number of folks who would seem to practice theistic Satanism (meaning that they think there is a supernatural, cast out of Heaven, fallen angel and they worship him rather than the Yahweh of Christianity), but they are so small in number as to be almost non-existent. They certainly are not the massive, organized group that the “Satanic Panic” of the mid 1970s and 1980s. In fact, all of the accusations of organized Satanic cults (or abuse) were  made up, either purposefully or due to false memories.