The Bad “Science” behind Reparative Therapy

The Bad “Science” behind Reparative Therapy by Faris Ghani

“It is not natural.”

These are the words echoed by those who regard homosexuality as morally unacceptable or impermissible. These are the arguments used to perpetuate prejudice, segregation, and abuse.  Unfortunately, these arguments have manifested in a form that is not only hate, but actually harmful to homosexual individuals — “reparative therapy.” 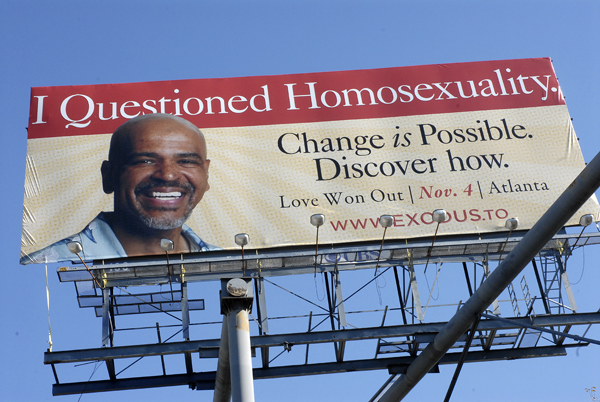 Despite the American Psychiatric Association’s decision to declassify homosexuality as a “disorder,” or “sociopathic personality disturbance” in the 1970s, the idea that sexual orientation can be changed persists. This idea lives through organizations such as the National Association of Research and Therapy of Homosexuality (or NARTH) and Exodus International.

The claim that homosexuality can be “cured” is rooted in Freudian psychoanalysis. Apparently, human beings are “born bisexual and can move along a continuum from one end to the other.” This view is inconsistent with the claim that homosexuality is an abnormality that needs to be cured. If one were to move along the continuum due to his or her own “natural” predisposition, there is no abnormality to be cured in the first place. However, it does support the claim that sexual orientation can be changed.

According to a 2004 article in the British Medical Journal, reparative therapy in the 1960s and 70s included aversion therapy: patients were shocked or given nausea-inducing drugs when exposed to homosexual erotica. Another psychoanalytic view posits that the “disorder” of homosexuality originates from overbearing mothers and distant fathers. This “theory” was touted by Dr. Joseph Nicolosi, a former president of NARTH. A patient of his, Gabriel Arana, a senior editor at The American Prospect, was told to distance himself from his parents and his female friends. The problem with “reparative therapy” (also called “sexual reorientation” or “conversion therapy”) is that it relies on the pseudoscience of psychoanalysis. The World Health Organization  stands against reparative therapy because it does not successfully convert homosexuals to heterosexuality. Instead, it “lack(s) medical justification and represent(s) a serious threat to the health and well-being of affected people.” “Repression of sexual orientation has been associated with feelings of guilt, shame, depression, anxiety, and even suicide.”

With homosexuality no longer classified as a “disorder,” it appeared that religious organizations such as Exodus International had taken up the fight to “cure” homosexuals. The pseudoscience used to back themselves up became — if at all possible — less scientific with the inclusion of the Christian God. Even NARTH, the most secular-looking proponent of reparative therapy has ties with socially conservative advocacy groups. Dr. Robert L. Spitzer, one of the psychiatrists responsible for the American Psychological Association’s dropping of homosexuality as a “disorder,” ran into a group of protesters in 1999 — self-proclaimed ex-gays. This sparked something in Robert Spitzer: an interest in reparative therapy. Specifically, an interest in its efficacy in “reorienting” homosexual individuals. Spitzer went on to conduct a study that was seriously flawed. It relied on the testimony of the individuals who had gone through reparative therapy. Further, according to the New York Times, “…it did not test any particular therapy; only half of the participants engaged with a therapist at all, while the others worked with pastoral counselors, or in independent Bible study.” Spitzer’s study has failed the rigors of the scientific method. Despite this, his study was still the “scientific” push needed by reparative therapy groups to seem more legitimate. He maintained that the study did not advocate that homosexual individuals should be cured. Instead, it showed that they could be.  That does not actually vindicate the harm Spitzer’s study has caused.

“Sorry.” After over a decade, Dr. Robert L. Spitzer issued an apology to the gay community for his study that was snatched up by ex-gay and reparative therapy groups to be used as evidence for their position. Spitzer finally recognized the mentioned flaw in his study; he agreed that testimonials are not sufficient for a scientific study. Calling people up and asking them if they had changed is not scientific evidence. Human beings not only lie to others but to themselves. This recognition led Spitzer to ask “How do you know someone has really changed?”

“Sorry.” John Paulk, the former leader of the ministry Love Won Out and former chairman of Exodus International, disavowed reparative therapy, finally identifying as a gay man. Paulk went on to say that reparative therapy does not change sexual orientation and in fact, causes great harm to many individuals.

“Sorry.” Exodus International’s Former President, Alan Chambers, also issued an apology as he announced the shutdown of the organization. Chambers said in an interview, “The therapeutic aspect of [Exodus International], not to mention the short stint we had in the political world on this, really did a disservice.”

Is “sorry” enough for the damage they had done? These men have ruined the lives of many individuals. They had perpetuated a sense of self-hatred, guilt, and shame in people. They have even driven some to the point of suicide.

The movement of reparative therapy has met quite a challenge as of late. Spitzer, Paulk, and Chambers, have come forward and admitted that their work has had a negative impact on homosexual individuals. Spitzer’s study has been discredited and one of the biggest reparative therapy organizations has been shut down. In California, attempts to force minors into these forms of therapy have been banned by the state and this law was upheld after facing opposition. The opposition claims that this ban is a violation of the First Amendment rights of therapists to free speech. There is a difference between free speech and abusing homosexual individuals — especially minors. Parents claim this ban has taken away their right to raise their children in any way they deem fit. However, parents do not have a right to force their children into something that has shown to be pseudoscientific and harmful to their mental health. New Jersey has followed in California’s footsteps and has banned reparative therapy. Tim Eustice, the assemblyman and sponsor of the bill in New Jersey called it “an insidious form of child abuse.”

Reparative therapy needs to be abolished for what it has done and could do to homosexual individuals. These organizations merely take advantage of individuals who seek to change their sexual orientation for the sake of avoiding prejudice and discrimination. From a philosophical stand point, there also seems to be a false dilemma occurring. Homosexuality is either natural or unnatural. Even if it were the latter, what of it? How does something unnatural equate to immoral? If reparative therapy advocates truly want to define something immoral as unnatural, they will have to start fighting against everything from prescription glasses to the computers they type out their hateful propaganda on.