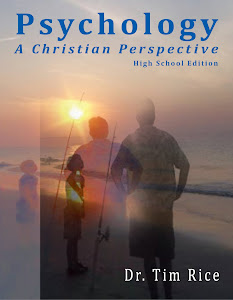 I am a psychologist, a professor, a scientific skeptic, and a freethinker. So when I see a headline like this, it grabs my attention:

I could not, of course, help but click through. Having seen firsthand the wholesale lies and deception present in “Christian perspective” biology textbooks, especially in the evolution chapters, I was very interested in what would be said about psychology.

The press release itself was an eye-opener, including statements like

Some have called Psychology ‘the great seduction in preparation for the antichrist.’

The text’s author, Tim Rice, has a doctorate of ministry, is apparently licensed as a professional counselor, and works in a community mental health center. Not exactly stellar credentials for a textbook author, but maybe he’s going to give things a fair shake and not be biased. Nope. In his mission statement he says “My mission is to reclaim psychology for Christ.” Let’s examine the text, then, shall we?

The contents page seems fairly standard for an introductory text, with the addition of “Chapter 2: A Christian Worldview.” This is usually where most texts have a chapter on “Research Methods” that helps to introduce students to how we know what we know is accurate, and not based on self-deception. Many texts today also include a brief introduction to critical/scientific thinking in this chapter. Interestingly, this author decided to move the “Research Methods” chapter to the very end of the book. Although I’m not certain, I would guess this is because doing so earlier would prime students to call into question any of the “Biblical worldview” presented as being lacking in evidence or having not undergone peer review.

The introduction starts things off with a completely reasonable statement:

Some Christians think psychology is an important discipline, that it is consistent with a Christian worldview, and that it is an acceptable field of study and career choice. Other Christians see psychology as an idolatrous and ungodly rival religion. I…wait…what? A religion? I don’t think that the author actually understands what makes something a religion. I assume he is okay with this, though, as he goes on to say that some seem psychology as “the most deadly form of modernism to ever confront the church.”

The author goes on to state that:

In fact, psychology professors tend to have high levels of agnosticism and atheism and may attack Christian worldviews as unscientific, irrational, prudish, exploitative, controlling, inhibitive, oppressive, and naive.

Having taught psychology for over 10 years now, I can honestly state that I have never seen or heard of a psychology professor attacking Christianity within the classroom. In fact, the places I have worked have a majority of believers among faculty (slight majority) and students (overwhelmingly so). The only actual data I could find on this said that about half of psychology professors are non-believers (which means half are). Interestingly the same study found that psychiatrists are the least religious group of physicians, so the author’s assertion that “material taught in any introductory psychology course will challenge a student’s beliefs” may be accurate.

Of course, he doesn’t stop at calling psychology anti-Christian, but also alludes to the “anti-scientific philosophies embedded in modern psychology.” Part of this, of course, relates to that terrible, terrible person Charles “Why do fundamentalists hate me so much?” Darwin and his theories of evolution by natural selection. According to this author, who tips his hand (and political agenda) a bit early,

Psychology, more so than biology, is where the theory of evolution has the most difficulty….The fight against evolution is not likely to be won with arguments of sub-cellular irreducible complexity. It is winnable in the arena of the incomprehensible complexity of the human mind.

Funny, you know what was said about biology for the last 150 years (and is still repeated, despite it’s absurdity)? That we would never be able to explain complex adaptions and structures using natural selection, that a god must have intervened. Turns out, not so much. Psychology is still in it’s infancy as a science, no argument, but the strides we have made in understanding behavior and cognition over the past 50 years have been amazing. To say the mind has “incomprehensible complexity” and that we will never be able to understand it is to simply imply that you don’t actually know the field very well, or that you haven’t paid attention to how thoroughly such intelligent design propaganda is defeated.

Remember, we’ve not even made it out of the introduction so far. Surely the rest of the book can’t be this heavy-handed, right? Wrong.

The first chapter is entitled “What is Psychology?” Immediately, the reader is told that

If Christ is the Lord of all, then he is Lord of theology, education, biology, and psychology.

Mighty big bucket of assumptions you are making, Tim. We go on to learn that psychology is the scientific study of emotions, behaviors, and cognition. Wait, didn’t he just say four pages earlier that psychology is anti-scientific? This certainly isn’t the only head-scratching moment of the day, as later in the chapter he gives several examples of questions that psychology could help Christians answer, including

Can research support the beneficial effects of prayer and meditation?

What is the most effective treatment for cultic brainwashing?

The irony is thick in this one. Turns out, we actually have really good answers to both questions from decades of scientific research, and fundamentalists won’t like the answer to either one (respectively, they are answered with “Only on individual well-being, certainly not in terms of intercessory prayers” and “Teaching people to be critical thinkers”).

Throughout the rest of the book (disclosure: I only read the first three chapters before wanting to mind-vomit), it is damn near impossible to read a page without an exclamation of “What?” or “But that completely contradicts your other statements!” One of my favorite examples is from chapter two, where he writes

Shut the front door! What is this nonsense!?! Certainly there are things that I believe or hold true that have not been scientifically put to the test (that my family will always be there when I need them, for example), but as a scientific skeptic I look at the data and science to inform and shape my view of the world. 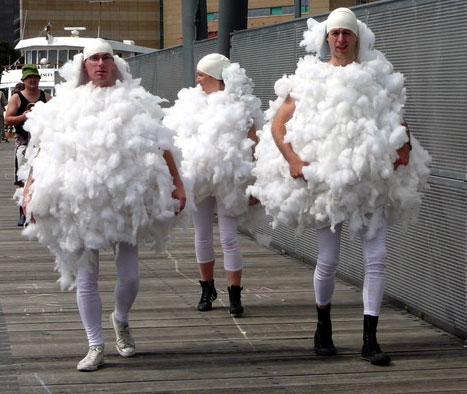 One of the biggest problems I saw with the book and accompanying teacher’s guide was that it repeatedly claims to want to teach students how to think critically. But the text itself repeatedly tells them not to do so – to accept matters on faith, put trust in a 2,000 year old book rather than empirical evidence, to not question themselves or their religion. That is not thinking critically but instead is teaching your students to continue to be good little sheeple.

So, in conclusion, this books is a terrible excuse for an introductory psychology text, if your purpose is to learn about psychology. If you instead want to insulate your child from ideas because you are afraid they might begin thinking for themselves, then this is your book!

EDIT/UPDATE: Apparently Dr. Tim Rice took offense at my review and wrote “Prepare your students now, Dr. Lack is waiting for them.” I tried to respond to him on his blog, but apparently the comments are moderated, and mine didn’t go through. But yes, I am waiting. I am waiting to tell them about scientific psychology, and not religion, which gets barely a mention in my general psych courses (the exception being when we talk about stress and coping, and how many people rely on religion to assist them in coping with major stressors).