At least twice in the history of organized skepticism we have witnessed someone from within the movement endeavoring to call an entire academic discipline into question. The first of these events took place in 2012, at a conference called World Skeptics, and again at Skepticon here in the United States.

Now on stage at #6WSC12: @rebeccawatson about "How Girls Evolved to Shop, & Other Ways to Insult Women with #Science": http://t.co/fBdgeP4T

Rebecca Watson on evolutionary psychology and gender stereotypes by Techniskeptic via #soundcloud http://t.co/TqWc6vkr

Excellent summary of how evolutionary psychology is so often bullshit, from Rebecca Watson. YouTube http://t.co/SlCqOfdk

An example of BAD science? Great discussion by Rebecca Watson: "How Girls Evolved to Shop" http://t.co/cq1tU8BX via @gregladen (lang. nsfw)

Excellent talk by @rebeccawatson should be subtitled "Why evolutionary psychology is horseshit" http://t.co/5jwGnemk

The money quote here may be found in the SoundCloud link provided by Daniel Waddell, “Basically I used my talk as an opportunity to slam evolutionary psychology for half an hour.” There is little point in revisiting what went wrong (and right) with Watson’s talk, but if you require a refresher, please feel free to visit Ed Clint’s blog for a very thorough discussion. It suffices to say, here and now, that many skeptics received Watson’s talk as a broadside against an entire field of scientific inquiry, rather than criticism of specific bad practices in marginal academic journals or science reporting outlets produced for general readership.

The second attempt to marginalize an entire academic discipline was launched nearly five years later, from the flagship Skeptic Magazine.

Professors exposed gender studies as a sham with a clever hoax about "The Conceptual Penis." https://t.co/jioSl6gnv5

The debate rages on as to how much the “Conceptual Penis” hoax really tells us, and credit goes to Skeptic Magazine for recently publishing Alan Sokal’s mildly critical take on the issue. That said, authors with a conservative political agenda were quick to make vastly overbroad claims on behalf of the hoax, such as the following headline from Breitbart contributor James Delingpole: 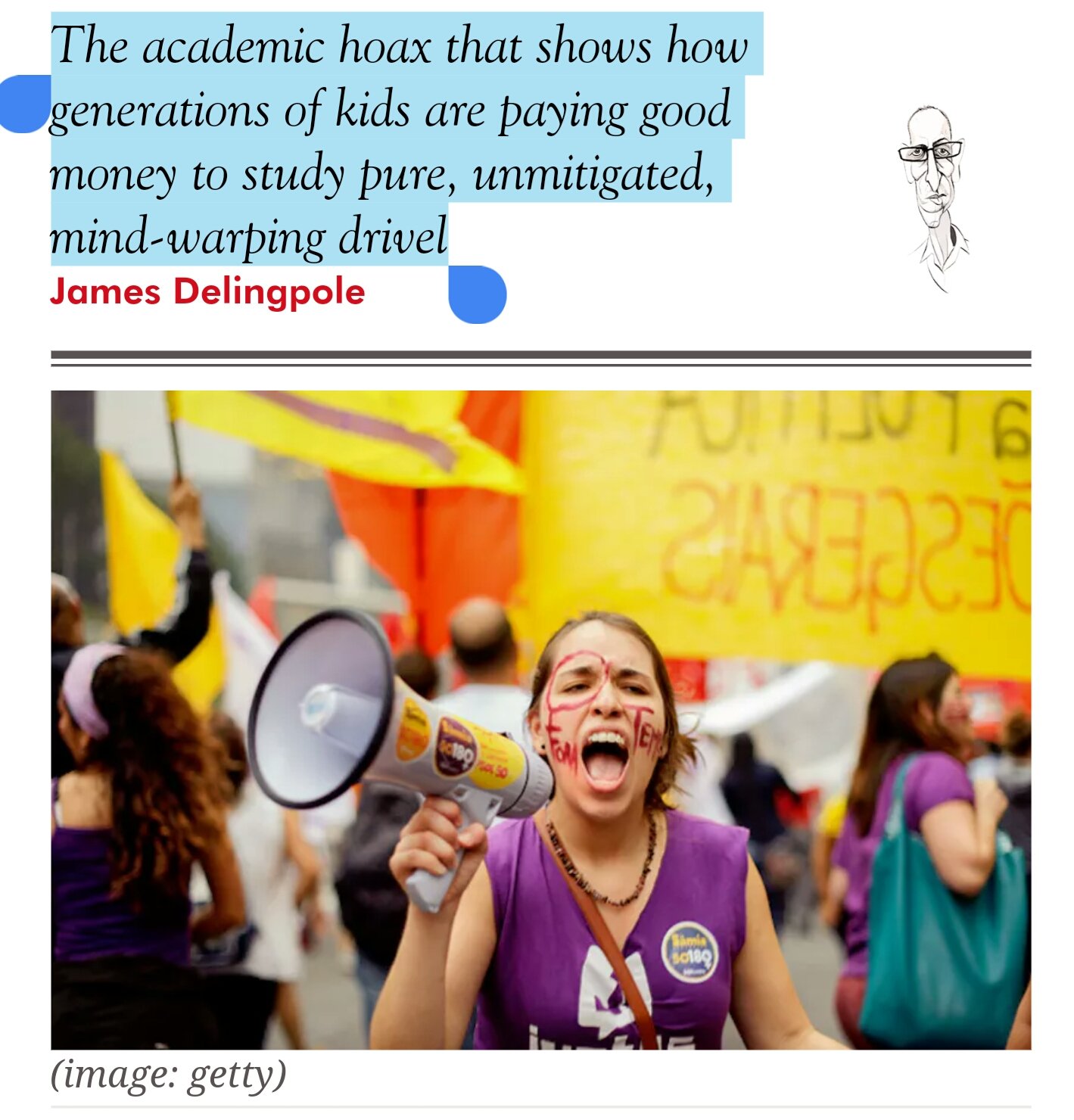 (Strangely enough, the above article was uncritically reshared by one of the penis hoaxers, revealing an underabundance of epistemic caution, along with a willingness to promote profoundly unskeptical leaps of logic.)

What can we learn from these parallel examples? Progressives hope to discredit evolutionary psychology because it tends to undermine their values and goals, conservatives hope to discredit gender studies for essentially the same reasons. It is relatively easy to cherry-pick examples of evo-psych done badly, and at least as easy to do this to gender studies, but citing to a carefully selected fraction of the relevant literature cannot give us an accurate picture of any field of study.

Other parallels leap to mind. In both cases, we saw a bifurcation of the skeptic community into two main camps: (A) Handful of Bad Apples vs. (B) Entire Barrel Spoiled. There are plenty of waypoints along the road from A to B—to mix my metaphors—but few seemed interested in homesteading the middle ground. Probably not fertile territory anyhow, and one would be subjected to raiding parties from both camps.

To be clear, I do not believe evolutionary psychology and gender studies are remotely on equal footing. When the two fields disagree on a particular question, perhaps whether sex differences in mate preferences are driven primarily by cultural normalization or biological adaptation, I expect gender studies to lose the argument, on the merits, pretty much of the time. (Side note: Anyone know of good candidate hypotheses for putting these two fields head-to-head?) Given my personal bias, I am more likely to be a thoroughgoing skeptic when faced with arguments against evolutionary psychology than when faced with arguments against gender studies. I have to make a conscious effort to power up my skepdar when faced with criticisms of gender studies, or when faced with sloppy reasoning in support of evo-psych. This is an effort worth making, if I hope to have a more accurate picture of reality tomorrow than I do today.

I look forward to more attempts to breach the walls of both evolutionary psychology and gender studies. Well-founded theories will bear the process of improvement, poorly evidenced theories deserve their coming demolition. Let us move forward with a hunger for evidence and a willingness to suppress our biases and change our minds.