Many of my fellow Americans will take a moment to celebrate our Irish ancestry today, wearing green and perhaps hoisting a cup of that abominable corporate-spawned syncretism known as a Shamrock Shake, which almost perfectly captures what it means to be homogenized, genericized, and Americanized.

Lest we forget our long history of nativism and xenophobia, I’ve collected here just a handful of editorial cartoons which capture the mood of 19th century anti-immigrant sentiment. Hard to imagine nowadays, but we Americans used to be terribly afraid that large numbers of immigrants would fraudulently skew our elections. In this cartoon, Irish Whiskey and Deutsche Bier are running off with boxes of ballots. This illustration by Thomas Nast commemorates an actual riot in New York City, back when Irishmen looked like extras from Planet of the Apes (1968). (Hey, at least he got the shillelaghs right.) 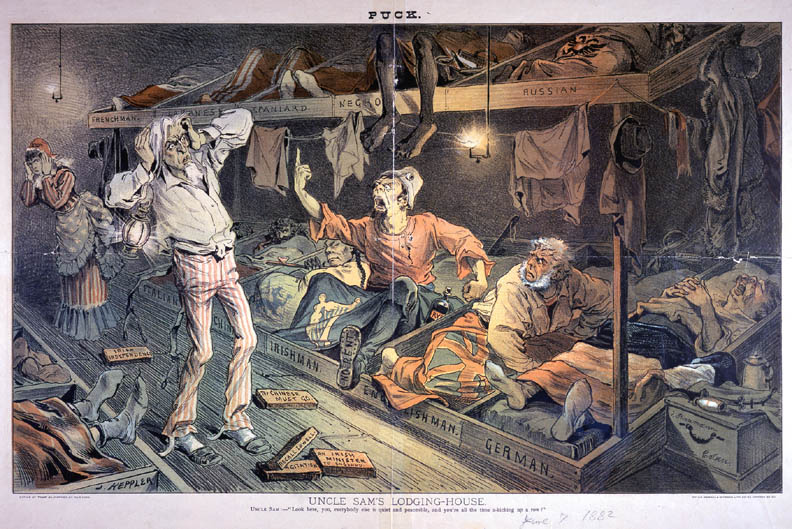 The lower caption reads “Look here, you, everybody else is quiet and peaceable, and you’re all the time a-kicking up a row!” Upper caption reads “PUCK” though I scanned it wrong the first time around. More info at Library of Congress. Speaking of which…

In this cartoon, C.J. Taylor asserts that the puckish Irish are “the one element that won’t mix.” All these years later, we have somehow survived their gradual assimilation.

Speaking as an Hispanic of Irish descent and German surname, it is difficult to imagine racial animus of this variety making it to mainstream newspapers these days, despite the unsubtle racism of Donald Trump. America isn’t perfect, but we are becoming better.