According to the new Oklahoma monument, the second commandment reads thusly:

“Thou shalt not make to thyself any graven images.”

The prohibition on graven images sure seems like one of the fuzzier ones, doesn’t it? I mean, what really counts as a graven image anyway? Presumably this image, somehow, does not count:

I’ve no idea why it shouldn’t, since there is an animal and a flag and at least a couple of other evocative symbols engraved here. Still, it’s intended for continuous display atop the Ten Commandments themselves, and surely the designers of a stone monument wouldn’t be so foolish as to violate and display a divine commandment at the same time, on the same stone.

Speaking of possible exemptions to the rule against graven images, consider this frieze of great lawgivers located on the wall of the U.S. Supreme Court: 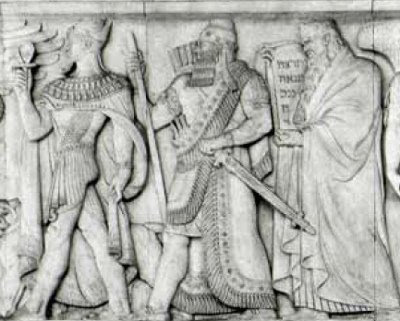 I have to assume that when Adolph Weinman was carving the Hebrew letters for the first of the Ten Commandments into Moses’s stone tablet, he did not consider this artistic work to be a serious violation of the ‘graven image’ taboo. Either that, or the master engraver was also a master of irony.

Beaux-Arts engravings aside, if you take the time to read the entire text of Exodus 20:4-6 you will see that this prohibition, taken in its entirety, is a ban on idolatry, along with a frank statement of divine insecurity and intergenerational retribution. This YHWH fellow, in addition to safeguarding His Holy Name, has created a religious monopoly by banning the competition. One wonders whether this ban created a black market in idols being sold to Jewish idolaters at well above the open-market value they would fetch in the idol-worshipping pork-eating non-Jewish Canaanite villages. Come to think of it, I bet they had an entire black market economy in pork as well.

As to the potential application of this commandment to modern American law, once again, the Commandments are directly at odds with the Amendments. Unlike the ancient Hebrews, our nation protects freedom of expression, even for engravers and idolaters. The score so far stands at zero for two.