Inequality and its discontents

Oklahoma has two major state universities that you may well have heard about if you’re an American: OSU and OU. Each of these, in turn, is surrounded by a college town large enough to support an independent atheist group. The Stillwater based group is relatively new and growing, while the Norman group is more well-established and benefits from a certain amount of membership and activity overlap with the AOK based in OKC.

Last weekend, I was invited down to speak at the Norman group on the topic of inequality in our society, evidently because I’m the most economically conservative person they could find. That is sort of weird, really, since I’m the used to being the token (moderate) progressive around family, friends, and co-workers — it’s only when completely surrounded by freethinkers that I’m ever considered even right of center. At any rate, I’ve been known to speak up for the efficacy of free markets at creating wealth, if not necessarily spreading it around.

The event was originally billed as a debate, but the other speaker and I could not come up with a general proposition upon which we could firmly disagree without getting rather narrow or overly nuanced, and that wasn’t exactly the point of the event. Instead, we agreed to keep it at the level of informal discussion, and spend a good deal of time interacting with the audience. We also spent a good deal of time pulling up charts and data on the fly, which proved to be a stimulating approach. I’d like to share just a few of the most insightful graphics that were presented on the night.

The first one is from Edward N. Wolff’s Working Paper No. 589: “Recent Trends in Household Wealth in the United States: Rising Debt and the Middle-Class Squeeze—an Update to 2007” and is a simple but striking pie chart:

It helps to bear in mind that household wealth is an aggregate of the value of homes, automobiles, businesses, savings, and investments and the like, minus the debt owed by the householders. Notice that the top 20% holds just over 85% of the wealth, at present.

The second chart comes from “Building a Better America–One Wealth Quintile at a Time” by Michael I. Norton and Dan Ariely (available online at http://pps.sagepub.com/content/6/1/9): 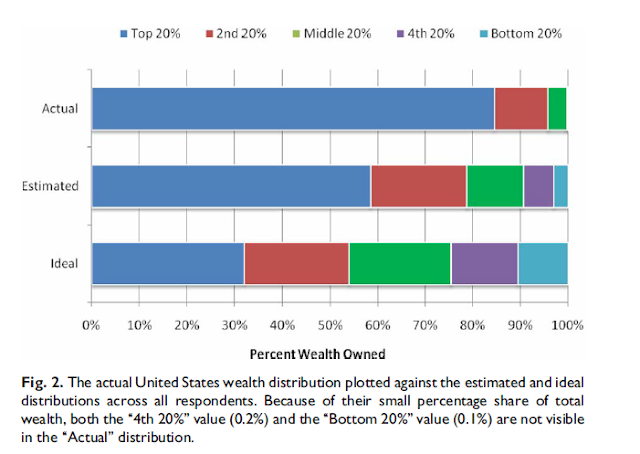 This chart shows that Americans are fairly idealistic about how they would like to see wealth distributed (bottom bar) and overly optimistic about how it is actually distributed at present (middle bar) when compared to the actual distribution (top bar). We spent most of the evening discussing possible policy changes which would make the actual distribution look more like the ideal distribution favored by the respondents here. The solutions most heavily discussed were a reformed estate tax so as to prevent massive intergenerational transfers of wealth, more progressive income taxes (moving towards top marginal rates last seen under Eisenhower), and enhancing the school systems and social safety nets so as to allow the bottom quintile a better shot at competing in the labor markets.

We also had a bit of a look at inequality around the world, using the Gini coefficient:

As you may have already guessed, the blue/indigo end of the color spectrum indicates higher levels of income equality. I have to belatedly call bullshit on this map (at least in part) because it mixes in pre-tax and post-tax data. If the U.S. was colored according to it’s Gini coefficient after taxes and transfers, it would be colored the same as Japan and New Zealand. Still, the map does give on a fairly good sense of the ability of wealthy OECD countries to provide more of a level playing field.Probably the most challenging question from the audience was why inequality should be considered a bad thing, in and of itself. My answer to the question, which I did not adaquately formulate at the time, is that inequality is a bad thing inasmuch as it perpetuates an unsustainable national deficit and prevents the fair allocation of public goods such as education and health care. If unemployment were low, and the working poor could acheive a reasonable standard of living to include health coverage and quality public education, and the national fisc weren’t generating record levels of debt, I’d have no serious compunctions about the fact of inequality in any of itself.