It’s not like me to engage in bouts of wild optimism, especially not while doing quantitative forecasting. But hey, what the hell, I’ll try anything once. Let’s assume just for the sake of argument that the last quinquennium of growth in the religiously unaffiliated (recently reported by Pew) proves linearly sustainable at similar rates. This is what four decades of growth would look like: 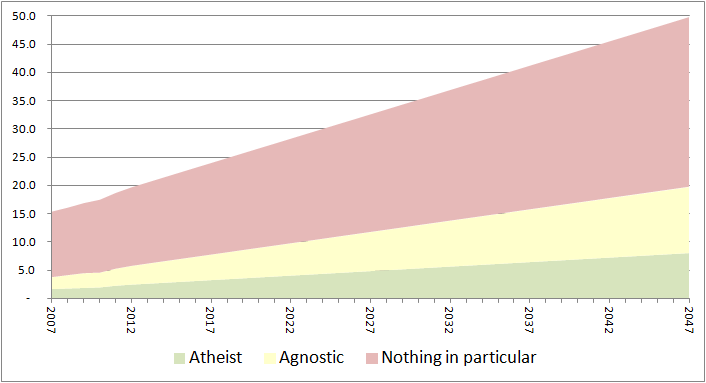 None too shabby, right? Those without any religion be up to half of the U.S. population before 2050.

A few notes of caution, however. Firstly, growth curves for all sorts of natural phenomena tend to taper off after an initial spurt. Resources become constrained, populations develop resistence, competitors rush in. Secondly, atheists are growing slower in absolute terms than the other two groups, both of which somehow lack the ability to determine or declare that powerful invisible minds are fictional. By the time non-religious people make up 50%, self-identified atheists would still be under 10%. Finally, as I mentioned yesterday, failure to identify with religious faith does not automatically make someone more rational or skeptical in other areas, such as acceptance of new age woo, homeopathy, talking to the dead, and other such scams. Charlatans without pulpits are charlatans nonetheless.