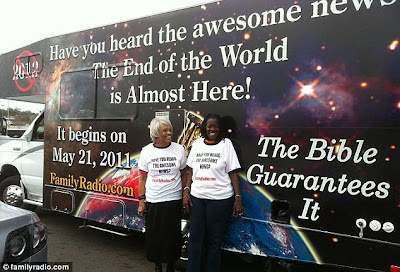 Calling themselves ‘ambassadors’, the church members point to baffling biblical codes to demonstrate their reasoning.

Speaking to CNN the group’s leader, 89-year-old Harold Camping, is adamant that the date is accurate.

[F]or anyone harbouring doubts over the accuracy of the prediction, the group has a cast iron answer – ‘the Bible guarantees it’.

‘If I were not faithful that would mean that I’m a hypocrite.’

Despite his conviction, Camping has predicted the world would end before – on September 4 1994.

That, he says, was a mistake, a misreading of the biblical codes used to decipher the exact date of the ‘rapture’.

In order to get the warning out in time he fudged his calculations, a mistake he maintains he did not make this time.

I find these kind of cases fascinating. The really interesting bit, psychologically speaking, will be what they are going to say May 22nd. How will the “cognitive dissonance” be dealt with? After all, they did say, “The Bible guarantees it”.